So it's nice to have something extraordinary to announce here on this blog. The last biggie was my acceptance into USC's MPW program last spring. This time, it's --

I've been accepted to Skidmore College's New York State Summer Writers Institute for two weeks of intensive workshopping and networking. One of my professors from USC nominated me, and after submitting 15 pages of my writing, I got the acceptance notice and scholarship yesterday. I am totally humbled, and really looking forward to this opportunity.

I'll be spending the last part of June and the first bit of July in Saratoga Springs, NY on the Skidmore College campus. There I'll be studying with both Joseph O'Neill (NETHERLAND) and Allan Gurganus (OLDEST LIVING CONFEDERATE WIDOW TELLS ALL) in two separate workshops. Other writers who will be there at the College during that session: Jim Shepard (PROJECT X), Claire Messud (THE EMPEROR'S CHILDREN) and Phillip Lopate (TWO MARRIAGES).

Posted by Justin McFarr at 6:16 AM No comments:

Day 7. In honor of tonight’s airing of the 82nd Annual Academy Awards, here’s a little parody piece I wrote in early 1999, shortly after SAVING PRIVATE RYAN was passed over for the Best Picture Oscar it deserved and should have won. This script was originally envisioned as a Flash web short, using .jpeg photos for the actors, animated in front of real-life backgrounds.

It’s juvenile, crude, and would have been perfect to watch with your dial-up connection to Icebox or JibJab 10 years ago. But, hey, here’s the script anyway.

Six silhouettes emerge over a ridge, dressed in military uniforms from WW II. STEVE GUTTENBERG leads the pack, followed by ANDREW "DICE" CLAY, a wheezing WILFORD BRIMLEY, MAC DAVIS, ERIC ROBERTS and a hybrid being with two heads and one body made up of COREY HAIM and COREY FELDMAN.

STEVE GUTTENBERG
Sorry, Coreys, but we're in the middle
of a war out here. We're on our own,
with no help from the outside world.

WILFORD BRIMLEY
(in between deep breaths)
I could... go for... a Krispy Kreme...
right about... now.

STEVE GUTTENBERG
He's the guy you shouldn't remember.
The dope with the guitar. 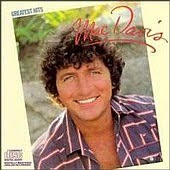 Blank stares from everybody.

ERIC ROBERTS
This doesn't seem right, Hortense, what
we gotta do out here.

STEVE GUTTENBERG
I don't like this assignment any more
than you guys do, but we're being paid
SAG minimum, so that's good enough for me.

COREY HAIM
What's so special about this guy that --

COREY FELDMAN
-- we're supposed to sacrifice our own careers for him?

ANDREW "DICE" CLAY
I'm with these two fucking freaky
midgets here. My career's pretty much
in the pisser and I could use a serious
boost of my own. Sure, I'm a tub of
shit, I'm losing my hair and I don't
think my jokes have ever been funny -- but
blow me, I got feelings, too.

ANDREW "DICE" CLAY
Guy does a hundred fucking "Police
Academy" movies, suddenly he's in charge, telling us when and where to shit. I don't get it.

ERIC ROBERTS
Tell you what I don't get. I've got an
Oscar nomination, but do the producers
and casting directors care? No, all
they see is Julia's little brother. She
flashes her pearly whites, she gets
twenty mil a picture and her own Oscar
nomination. I flash my yellow choppers,
I get cast as the psycho killer in a
direct-to-Cinemax flick. Does that seem
right to you, Arturo?

From over the hill, a group of GERMAN SOLDIERS emerge.

The actor-soldiers grab their guns and shoot it out with the enemy. All the Germans go down, but not before shooting off ERIC ROBERTS' thumb.

ERIC ROBERTS
They took my thumb, Charlie! My thumb!

MAC DAVIS
How about "Cheaper to Keep Her"? You
gotta remember that.

The actor-soldiers enter the small, waylaid villa. They approach a group of ALLIED SOLIDERS sitting around a table, drinking wine. 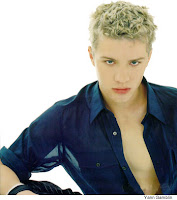 STEVE GUTTENBERG
We've got orders to take you back with us. It's been rough for you, we know, losing your career and all, but --

He starts to break down and cry.

RYAN PHILLIPPE
How could you feel my pain? Any of you?
I'm young, hot and the total "it" boy.
Nobody treats me like this, I'm Ryan
Phillippe.

RYAN PHILLIPPE
I kicked serious acting butt in "Cruel
Intentions" and Reese Witherspoon gave
me a daughter. Check it!

ANDREW "DICE" CLAY
You knocked up a broad? See, me, I
thought you was a major fudge-packer.
Hickory dickory dock and all that. Ohhhh!

One of the other soldiers, RYAN O'NEAL, removes his sunglasses and puts down his glass of wine.

STEVE GUTTENBERG
Our orders are to bring you back to
Hollywood. You're getting a second
chance, Private.

RYAN O'NEAL
I don't deserve it. I mean, look at the
mistakes I made in my career. All those
Peter Bogdanovich pictures -- what the
hell was I thinking? Even my daughter
Tatum got an Oscar and what did I get?
Bloated, that's what. No, leave me here
to the life I deserve.

RYAN O'NEAL
All of you deserve another shot, a lot
more than I do. Leave me here with the
fading memories of my glory days.

STEVE GUTTENBERG
If we can bring you back to the a-list,
we'll be accomplishing something, maybe
even redeeming our own bad career choices.
We can be responsible for re-creating a
future superstar.

COREY HAIM
Just think of us as the Quentin
Tarantino --

COREY FELDMAN
-- to your John Travolta.

ANDREW "DICE" CLAY
If that talentless, light-in-his-dancing-
shoes putz can do it...

STEVE GUTTENBERG
So can you.

RYAN O'NEAL
Yeah, but I don't deserve it.

STEVE GUTTENBERG
Then earn it.

MAC DAVIS
Okay, I got it. "North Dallas Forty."
Y'all gotta remember that one.

All the soldiers look at him, a bit of recognition shining through. Then --

The screen explodes in a FLASH of bright white LIGHT.

RYAN O'NEAL, a bit older, stands in front of a headstone.

RYAN O'NEAL
All these years, since I got back to
Hollywood, I've been trying to live by
your words. I hope I've had a better
career since you sacrificed yourselves
for me. I just got the lead in "Ishtar 2"
and was single-handedly responsible for
getting the "Porky's" franchise going
again.
(beat)
I hope that I've... earned it.

He pulls a wad of cash from his pockets, sprinkles it on the grave. Starts to cry. Pulls more money out. Falls in a heap on the grave, crying like a baby. 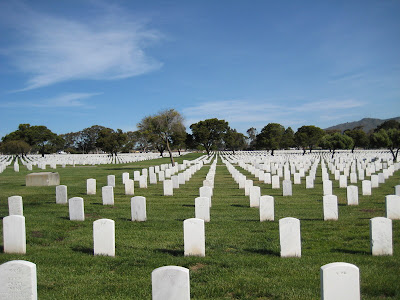 Posted by Justin McFarr at 6:07 AM No comments: