Just finished Philip Roth's latest and wanted to post my review here as soon as possible. If you haven't read a novel by the author, you owe it to yourself to pick one up and see what all the hype is about. Personally, I'd recommend for first-timers THE DYING ANIMAL, THE GHOST WRITER or his first, GOODBYE, COLUMBUS, a novel with 5 short stories added. The new one is also pretty good, too. Read on. 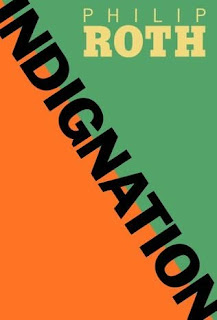 indignation / n : anger aroused by something unjust, unworthy, or mean.

Philip Roth’s 29th book (and the 15th of his I’ve read) is the best of the last few, similarly short, novels he’s produced. I thought EVERYMAN was a total waste of time, and saw EXIT GHOST as an interesting but not wholly successful follow-up to THE GHOST WRITER, but his newest really worked for me. The first-person narrator, Marcus Messner, possesses a voice that is equal parts brilliant, precocious, antagonistic and innocent. The time is 1951, the place is a small Ohio college, where this kosher butcher’s son from Newark has just transferred as a sophomore. The university is Winesburg -- an allusion to Sherwood Anderson’s fictional town and novel about rural town grotesques -- that is pure, Christian-valued, Americana. Of course, it’s the perfect place for a Jewish genius to get in touch with his intolerance, test his social and sexual mores, and escape the seemingly endless march of young American soldiers into the Korean War.

The plot revolves around Marcus’ attempts to separate himself, both physically and emotionally, from his suddenly tyrannical father, who has grown paranoid and distrustful, convinced of his son’s impending death at the hands of the big, bad world. Marcus rebels in the only way he knows how, by escaping five hundred miles away to a Gentile-filled campus where he blends in by disappearing altogether. He attends class, argues with his roommates, and focuses all of his prioritized energies on getting straight A’s and achieving the rank of school valedictorian. Complications, big and small, arise, leading the main character into a questionable romance with a labyrinthine girl, a number of confrontations with the soberingly thoughtful yet condescending Dean of Men, as well as a slew of other pursuits both intellectual and emotional.

The main conceit of the novel, beyond Marcus’ desire to avoid the war and distance himself from his father’s madness, is something I won’t reveal here, allowing the surprise and climactic discovery to remain a genuine twist for the reader to ponder and enjoy. Beyond Roth’s main hat trick, there are plenty of wonderful scenes and characters to revel in, with their compelling thematic thrustings and morally ambigiuous ramifications supplied to attack and dazzle the senses. The novel, like his earlier works, is about youth and the hope for understanding and the wish to be understood. Marcus is at once the polar opposite and a carbon copy of Alexander Portnoy, whose complaints were as important and vital to his being as Marcus’ indignation is to him. It’s been almost 40 years since Roth’s scandalous novel was published, and his newest proves that he still has the literary and controversial chops he had back then.
Posted by Justin McFarr at 9:46 AM No comments:

Time for another book review, this a novella from 1997 that I read in a few short hours. 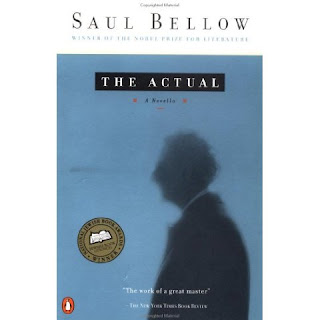 In this novella by Pulitzer Prize- and Nobel Prize-winning author Saul Bellow, obsession and denial are key ideas that inhabit a story without much forward momentum or plot. Harry Trellman, the first-person narrator, is Jewish but looks Chinese – a detail of his appearance that is revisited again and again for no truly discernable reason other than to illustrate how much of an outsider Harry is to everyone around him, including himself. In fact, physical appearance takes up much of the non-dialogue description, with every one of the sparse number of characters identified repititiously by similar, if not exactly replicated, specifics of physiognomy. It happens so frequently, in a barely-hundred-page book, that it seems Bellow must be after some deeper meaning, must have some compelling reason to continuously describe his spare cast. Whatever the reason, I think I missed it, so instead of striking my reader’s eye as profound, the technique became distracting, and finally irritating at a certain point.

The book starts out strongly, introducing a fairly enigmatic character in Harry, and even pretends for a moment to have an intriguing story at the point the narrator meets billionaire Sigmund Adletsky for a wary, suspicion-bent tete-a-tete. But by page seventeen, Harry’s association with the old moneybags is done and the focus shifts to Amy Wustrin, whose story carries practically the next third of the novel. She is an old flame of Harry’s, a woman he has never forgotten and who he continues to pine over, to the point of creating daily conversations with her in his much-too-sharp, currently-unchallenged mind. The obsession slant is nice, but it never really develops further than fantasy and backstory, with a scene of confession that comes late and fails to deliver anything dramatic or climactic.

In all, there is nothing very exciting or tantalizing in the book, despite attempts to delve into Philip Roth-style, sexually-graphic-prose territory that ultimately comes off as feeble and unimaginative. This is the first book of Bellow’s that I have read -- and I do plan to read more, despite my extremely lukewarm reaction to this short work -- and far be it from me to slam a multiple-award winner, but the book as a whole struck me as a dud. The shift from Harry’s p.o.v. to a sloppily constructed, and ill-advised narrative avenue into Amy’s mind was Bellow’s first misstep, followed by his abandonment of Harry’s direct relationship with Adletsky’s “brain trust” and finally, the excessive, mind-numbing attention paid to Amy’s ex-husband’s burial arrangements. The book takes off like a well-crafted and perfectly aimed bullet, careens into blunt storytelling practices, then ricochets irresponsibly off poorly constructed firmaments, managing to completely shred the narrative terrain. The bullet does its damage, then loses momentum and wedges into an endless scene between Amy and Harry that curtails its projected force prematurely, all without ever managing to hit its intended target.
Posted by Justin McFarr at 11:14 AM No comments: