CONTROLLED CHAOS - The Book! - Is Here!

My collection of short stories (15 of 'em!) dropped yesterday, April 2nd. So excited to share them with everyone.

It's available in both Trade Paperback and Kindle versions. If you go to the Kindle page, you'll be able to read - in full and for FREE - the first story, "An 8-Pound Ball." I hope you enjoy reading these stories as much as I enjoyed writing them! 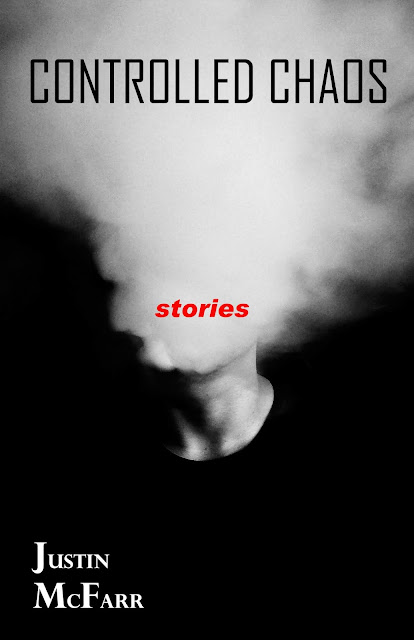 Posted by Justin McFarr at 5:34 PM No comments:

With the release of my first collection of short stories, CONTROLLED CHAOS, coming out this Tuesday, April 2nd, I thought it would be fun to make a list of my Top 10 books of short stories. I haven't read all of the classics (THE COLLECTED SHORT STORIES OF ANTON CHEKHOV, Flannery O'Connor's A GOOD MAN IS HARD TO FIND, Grace Paley's ENORMOUS CHANGES AT THE LAST MINUTE, just to name a few), but I've read a bunch of short stories overall, and a lot of collections. These are the single-author collections I've read and enjoyed, and hopefully learned a thing or two from, then put to good use in my own stories.

1) NINE STORIES by J.D. Salinger -- the only book of short stories I have read multiple times. Some are very dated, and the storytelling style is a bit antiquated by today's standards, but it continues to be a stand-out group of stories.

3) NIGHT SHIFT by Stephen King -- probably one of the first short story collections I ever read. Spooky and chilling and downright nightmare-inducing from the master of horror.

4) ELEVEN by Patricia Highsmith -- most of these would be considered horror stories, but so many of them are playful and full of suspense, wit, and depth.

5) INTERPRETER OF MALADIES by Jhumpa Lahiri -- a near-perfect collection of stories about the Indian experience, both in and out of America. Every sentence is lovely, every story full of bite and with tremendously well-thought-out structures.

6) THE ILLUSTRATED MAN by Ray Bradbury -- if this sci-fi / speculative fiction author knows anything, it's how to write fantastic short stories. Here are faintly-linked stories that weave from pathos to passion to perfection.

7) A MODEL WORLD AND OTHER STORIES by Michael Chabon -- the first half are all related stories about one small family, told from different perspectives and narrative points-of-view. The second half are just as well-written and enjoyable.

8) IN OUR TIME by Ernest Hemingway -- the first and best collection by "Papa," with lots of Nick Adams stories and a focus on masculinity and what it means to be not just a man, but a good man.

9) CATHEDRAL by Raymond Carver -- the master, at his most masterful with these simply-told, yet complex stories of the folks next door.

10) WE LIVE IN WATER by Jess Walter -- a compassionate look at the underbelly of Portland, Oregon, the poor souls who are usually the stuff of ridicule, but in Walter's hands are worthy of respect and of their (flawed) humanity.


A few more single-author collections worth your time: Amy Hempel's REASONS TO LIVE; GOODBYE, COLUMBUS AND FIVE SHORT STORIES by Philip Roth; THE PASTURES OF HEAVEN by John Steinbeck; THE GIRL IN THE FLAMMABLE SKIRT by Aimee Bender; Marisa Silver's BABE IN PARADISE; Denis Johnson's JESUS'S SON; THE ICE AT THE BOTTOM OF THE WORLD by Mark Richard; and Dylan Landis's NORMAL PEOPLE DON'T LIVE LIKE THIS

Posted by Justin McFarr at 8:49 PM No comments:

I'm back again (a little late) for my yearly list of the best books I read in 2018. All of these were read during the past year, but were not necessarily published last year.

1) PINOCCHIO by Carlo Collodi -- the strangest, wildest book-for-young-people that I have ever read. Jiminy Cricket is killed in Chapter 2, Geppetto is jailed for murder, the boy-donkeys are tortured, and the pacing is never less than break-neck speed in a very "R"-rated children's book.

2) FOR LOVE OF THE GAME by Michael Shaara -- a fantastic baseball novel, about the final game of an aging pitcher. Exciting, intense and heartbreaking ... one inning at a time.

3) SAGA VOL. 9 by Brian K. Vaughan & Fiona Staples -- the latest in the continuing adventures of star-crossed lovers Marko & Alana and their narrator-daughter Hazel, as well as Prince Robot IV and The Will. A terrific end-point of the series before a year-long hiatus by the creators.

4) YOUR HEART IS A MUSCLE THE SIZE OF A FIST by Sunil Yapa -- one of the most compelling novels I've read in quite a while. Every time I had a free moment, I reached for the muli-character journey into the heart of a day-long protest of the Seattle WTO meeting, just to spend more time in this world. Just a stunning piece of work.

5) I AM LEGEND by Richard Matheson -- the original zombie horror story, made into movies starring Vincent Price (The Last Man on Earth), then Charlton Heston (The Omega Man), and Will Smith. Matheson does so much with a lone man in semi-solitude, raising the tension of his isolation, his loneliness, and ultimately his battle against the soul-destroying survivors.

6) POPS: FATHERHOOD IN PIECES by Michael Chabon -- a bunch of previously published essays by the KAVALIER AND CLAY Pulitzer-prize-winning author, which touch on his own childhood, and the children he is currently raising with his wife, author Ayelet Waldman.

7) OUT OF MY SKIN by John Haskell -- a very L.A. book, about a not-exactly-stable first-person narrator who becomes a Steve Martin impersonator, changing his world one wild-and-crazy choice at a time. It reads much better than it sounds.

8) DOUBLE LIVES: TRUE TALES OF THE CRIMINALS NEXT DOOR by Eric Brach -- crooks, manipulators, and murderers have always lived among us. See my review here.

9) IN CASE OF DEATH by Brian McGackin -- a poetry book with a purpose: to explore death in all its many facets. See my review here.

10) MY NAME IS LUCY BARTON by Elizabeth Strout -- a  meditation on grief, the dreams that bloom in silence and regret, and the complicated relationships between children and their parents.

And, of course, my own small contribution to the literary landscape, A COMPANION TO THE BEAR WHO BROKE THE WORLD

Margaret Atwater's THE HANDMAID'S TALE, after which I'll watch the first two seasons of the TV series on Hulu.

The latest book by Lawrence Grobel, his short story collection THE NARCISSIST: STORIES

V. by Thomas Pynchon, THE GOLDFINCH by Donna Tartt, Walker Percy's THE MOVIEGOER, and hopefully many, many more.

Posted by Justin McFarr at 8:14 PM No comments: