In remembrance of the dropping of two A-bombs, Fat Man and Little Boy, on Hiroshima and Nagasaki, I submit this review of John Hersey's groundbreaking non-fiction account of the aftermath of that fateful day in the small Japanese town, 63 years ago today. 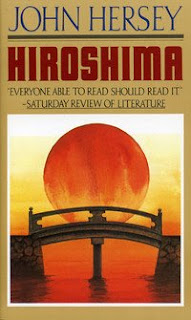 Journalist John Hersey’s non-fiction account of the atomic bomb blast on Hiroshima, Japan, was originally published in the August 31, 1946 edition of The New Yorker magazine, before becoming a best-selling book. In four chapters, Hersey covers a year in the life of six people—five natural-born Japanese and one German national—who survived the American attack on their beloved city. Chapter One, A Noiseless Flash, begins with the detonation of the bomb, “At exactly fifteen minutes past eight in the morning, on August 6, 1945, Japanese time” and ends moments later, shortly before the city catches on fire. The principal witnesses to the destruction are introduced: Miss Toshiko Susaki, “a clerk”; Masakazu Fujii, a doctor who works in a private hospital; Mrs. Hatsuyo Nakamura, a widow with three children; Dr. Terufumi Susaki (unrelated to the clerk), who is on the staff of the Red Cross Hospital; Reverend Kiyoshi Tanimoto, a Methodist; and Father Wilhelm Kleinsorge, a Jesuit priest of Germany, which was an ally to Japan in World War II.

The book begins without any setup other than the time, place, and central—real-life—characters. The background to the conflict is conspicuously absent, as are facts regarding political, military or geographical concerns surrounding WWII. Hersey assumes the reader has lived through the war, is current on all the pertinent details of the air- and ground-battle, so he wastes no printed space on the world leaders, generals, or military brigades in favor of devoting all of his energy to the civilians. In particular, the innocent victims of the end-game move by American president Harry Truman are who most concern the writer, and the book gathers their personal, eyes-on-the-ground experiences into a compelling narrative that encompasses not only six people, but an entire city.

Each eyewitness has a distinct personality, a specific lifestyle before the blast, and a horrific story to tell of its aftermath. In the three chapters following the introductory chapter, their six individual odysseys for survival and understanding converge and overlap. The interlacing narrative structure gives the reader a full perspective of the days and months after the atomic attack on Hiroshima, with six varying viewpoints organized into one fluid tale.

Hersey takes the reader through the city’s “clouded air…giving off a thick, dreadful miasma” primarily through the subjective lens of those who saw it first-hand, but he doesn’t limit his reporting to that narrow scope. He also offers many objectively reported facts and provides a larger perspective on the situation throughout the book, revealing details that the denizens of the devastated city were never privvy to, but which expand the reader’s understanding of their closed narrative. When the reader learns that, directly following the atomic blast, sixty-five of a hundred and fifty doctors died instantly, and that the majority of the remaining M.D.s were wounded, the story takes on a heightened sense of dread that would be missing without that information. The plight of the survivors becomes even more grim for the reader at this point, and the drama of their personal journeys becomes more immediate and emotionally wrenching.

The narrative voice of the author is extremely matter-of-fact, without any “commenting” on the actions or thoughts of the six people, nor any subjective commentary on those responsible for the dropping of a bomb that killed over a hundred thousand Japanese and injured thirty-seven thousand more. He lets the experiences of those who were there speak for themselves, and despite the occasional contextual bit of information, Hersey depends solely on their testimonies to tell the story.

The details are often graphic, with physical descriptions of burned and bloody corpses, vomiting children, maimed and ravaged survivors, as well as drowned and bloated dead. The tone has a somberness throughout, with a sense of compassion for those who suffered this ordeal felt within the narrative. The gruesome facts are given in an unflinching manner, yet there is temperance shown by Hersey, with the focus not so much on the devastation, but on the selflessness and hope the people of Hiroshima display in the face of chaos and confusion. They suffer physical pain, emotional hardships, yet all emerge somehow more closely attached to their community and to their fellow human beings. As Hersey writes near the end of the book, “One thing that they (the six people) did seem to share…was a kind of elated community spirit…a pride in the way they and their fellow-survivors had stood up to a dreadful ordeal.” When the reader reaches the final page of this short yet powerful book, that dreadful ordeal has been illuminated, humanized, and masterfully realized by a writer whose personal agenda seems only to be the reporting of the untold truth.
Posted by Justin McFarr at 9:26 AM No comments: