It's been awhile since I've posted a book review, so this one's some time coming. I have read quite a few books in the past few months, just haven't written anything on them. Hope to change that in the coming months. For now, here's Steve Martin's latest, a memoir about his stand-up career. 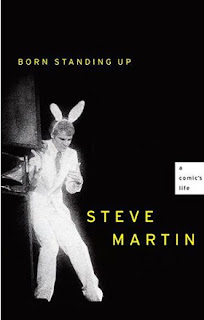 Steve Martin, the star and writer of “The Jerk” and “Roxanne” -- before he sold out to Disney in order to churn out stale, unfunny junk like “Father of The Bride II” and “Bringing Down the House” -- remains one of the funniest stand-up comedians ever. Richard Pryor has him beat by just thismuch, and Robin Williams in his prime was lightning in a bottle, but Martin was the first comic I ever deified. In the mid-70s I listened to all of his albums -- again and again and again -- and memorized his routines, cajoled my mother to let me stay up for his appearances on SNL, and even got a hold of a Playboy just to read his interview (really!).

Reading his memoir, BORN STANDING UP: A COMIC’S LIFE, transported me back to that little kid in me, the one who thought an arrow through the head and “Well, excuuuuuse meeeee!” were two of the funniest things in the world. The book is rich with routines from his stand-up past, the visual gags I missed by only listening to him on the album, as well as all of the nonsensical and philosophical bits he performed so masterly live and on vinyl. All the hits are here (the wild and crazy guy, King Tut, Ramblin’ Man, cat juggling), which make those sections of the book a nostalgic walk into a time when “happy feet” were both funny and just plain silly.

Martin doesn’t begin at his peak, however. He begins at the beginning, recalling his difficult childhood in Orange County and the evolution of a life-damaging, conflicted relationship with his father. As the comedian explains, he never understood why Glenn Martin hated his young son, only that he did, and continued to belittle and denegrate him even when Martin had become a bona fide success. The cliché goes that behind every clown is a little boy crying on the inside, and it holds true for Martin, the pain within fueling his drive for success and his mastery at buffoonery. As the author writes, in prose that is alarmingly simple and inelegant, “I have heard it said that a complicated childhood can lead to a life in the arts. I tell you this story of my father and me to let you know I am qualified to be a comedian.”

The quote above serves as good representation of the kind of language Martin uses throughout – direct and factual, yet slightly awkward and lacking any literary flair. From the man who wrote beautifully lyrical sentences in SHOPGIRL and concocted a sophisticated sequence of scenes in the play PICASSO AT THE LAPIN AGILE, the prose in his memoir is suprisingly flat and uninteresting. The stories are filled with terrific details and moments of true insight, but the writing itself feels unpolished and rushed. It’s hard to fathom why his prose is so bland, but perhaps he was attempting to write for a “mass audience” and felt that elevated language would detract from the life story and that to “keep it simple, stupid” was the best and most audience-friendly way to go. Whatever the reason, it was oft-putting to me and felt sloppy rather than inclusive or inviting.

The writing style aside, there is a lot to like in this book, from his early magician days at Disneyland and Knotts Berry Farm, to his writing staff positions on “The Smothers Brothers Comedy Hour” and “The Sonny and Cher Comedy Hour” with Bob (“Super Dave” Osborne) Einstein, all the way into his struggles as the derided opening act to finally playing headliner to tens of thousands of slavish fans. Martin shares the moments of despair, joke sets that confound Johnny Carson and the talk-show circuit, as well as his moments of triumph and being “the funniest [he] ever was.” It is a journey of failed gigs and insurmountable heights, inner turmoil and outer lunacy, full of silly props, stunning wordplay and, oh yes, that always-present banjo. Because, sometimes, what we really need is a little “Foggy Mountain Breakdown” to put it all into perspective.
Posted by Justin McFarr at 8:08 PM No comments: