Here's a review of a classic book from the 1960's, which I was inspired to read after finishing my novel. I'll be reading (and reviewing) more of these counterculture classics as I get closer to the publication date of The Bear Who Broke The World.

In the late 60’s and early 70’s, what self-identifying stalwart of the hippie lifestyle didn’t own a copy of this series of observations for the counterculture generation? Published in 1967, Brautigan generated simple musings in his own style, while borrowing heavily from Anderson, Hemingway, Heller, Kesey and Vonnegut. Delivering short chapters with the unifying thread of trout fishing, the author explores the outrageous with the commonplace, the placid with the disturbed.

A first-person account of life on the road, a postmodern take on Kerouac’s tale of the Beats, Trout dips in and out of small towns where Americana litter the streets and homes of a changing country. With chapter titles like “A Waldon Pond for Winos” and “Trout Fishing With the FBI,” the book plays with ideas of nature and freedom, addiction and authority with a kind of whimsy that underlies the gravity of idealism lost. In the narrator’s travels, he finds that nothing is quite as it was, while the present has yet to fully form into something coherent that serves as a replacement of what came before.

Name-checking Teddy Roosevelt, Nelson Algren, John Dillinger, Hemingway, and the blues song C.C. Rider in the chapter titles, Brautigan traces the familiar and the influential figures of the past with a reverence that carries a bit of nostalgia, as well. America is changing so quickly, he seems to be saying, that it’s crucial to remember the importance of the early part of the twentieth century. When he writes, “Along with World War II and the Andrews sisters, the Zoot suit had been very popular in the early 40’s,” Brautigan is singing the virtues of a lost era, one that defined an earlier generation and was as much about fighting for freedom and singing for joy as it was about racial identity and the inequality and violence that surrounded it. When he decides that, “I guess they were all passing fads,” it is a lamentation, the realization that everything substantial and once-profound becomes simply what was. These parts of history are meant to be pushed aside, in order to make room for the next transgression or life-changing event in a century filled with them.

Populated with characters that come and go and then appear again, slightly changed, the slim book attempts to make sense of the old and the new, written with equal parts humanity and satire. There is a curiosity at work here, a wonderment that is characteristically American and entrenched in values that must have seemed antiquated in a world where Vietnam and the assassinations of MLK & RFK, along with the corruption of Watergate, made rose-colored reflection something unworthy and frivolous. Where there is definitely a rejection of the racist, stubborn, afraid-of-change belief system that permeates these small towns that Brautigan’s narrator discovers, there is also an embrace of nature and its singular purity. As long as trout can still be caught in the lakes and rivers of America—a simple pleasure that is not attached to politics or economics or human strife–then perhaps the evolving world, with all its social and cultural turmoil, can be found to be bearable.

Maybe what Brautigan is trying to express in his book is that the consequential “fads” of the present will always give way to the next historic moment or state of mind, but those rivers full of trout will continue to run, a small, indelible fact of life that will remain constant and unchanged for this and future generations to come.

Posted by Justin McFarr at 5:09 PM No comments:

Labels: book reviews, The Bear Who Broke The World 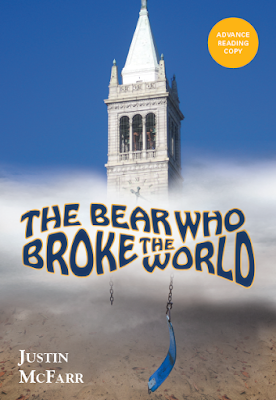 
Posted by Justin McFarr at 9:47 AM No comments: