I haven't posted a book review in a while, thought I'd share my thoughts on the latest one I've read. Jean-Luc Godard made a dandy little movie called ALPHAVILLE back in 1965. ZEROVILLE is a nod to Godard and his merry band of surrealist creative masterminds. It's on my recommend list. 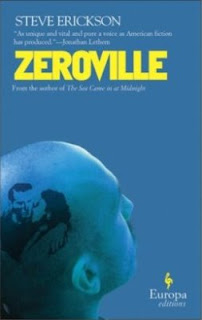 In the hands of actors, writers, directors and producers, Hollywood is a dream factory, a place that cranks out wish fulfillment scenarios like assembly lines manufacture automobiles. In novelist Steve Erickson’s hands, Hollywood is a fever dream, a waking nightmare that elucidates the truth of the self that only movies can attempt to uncover. ZEROVILLE - the latest novel by CalArts professor, Los Angeles Magazine contributor and literary cult figure Erickson – delves into the mystery and allure of celluloid, where a master shot gives the audience its bearing, but the close-up scrambles all perspective and engulfs the collective psyche in freeze-frame moments spanning whole lifetimes.

At the novel’s start, Ike “Vikar” Jerome, a cipher-esque, idiot-savant film fanatic, arrives in Los Angeles during the summer of 1969 and quickly sheds a Philadelphian past to embrace his new home. With a huge tattoo emblazoned on his bald head – of Montgomery Clift and Elizabeth Taylor from a scene in “A Place in the Sun” – and anger coursing through his body without restraint, Vikar hits the local art houses and Grauman’s Chinese Theatre in an effort to discover his own destiny. He visits the famous Roosevelt Hotel, where he searches for the ghosts of D.W. Griffith and Monty Clift himself; gets hauled in by the cops while camping out in the canyons, a suspect in the Manson Family’s horrific Tate-LoBianco murders; talks film theory with a career burglar tied up in Vikar’s new Hollywood pad; and is swept into the drug-addled, free-love, film-obsessed Next Generation auteurs plotting their movie industry revolution from the sandy beaches of Zuma.

Vikar’s story spans a decade, with the very Chance the Gardner-like main character swept through Hollywood, Madrid and Cannes by outside forces who find themselves intrigued and spellbound by his presence. His bizarre physical appearance, his vexing, non-sequitur-heavy dialogue, and his earnest, “I like to watch” approach to the movies attracts figures great and small, famous and infamous. Verisimilitude mixes with literary license as Erickson’s fictional creation Vikar befriends thinly veiled Hollywood luminaries like John Milius, Margot Kidder, Brian DePalma, and even a pre-“Taxi Driver” Bobby DeNiro. The author is coy about some of the real life characters, discreet about others, and blatant as hell about the rest of the filmmaking crowd in his efforts to blur the lines between reality and fantasy, truth and conjecture.

While there is much satisfaction in the guessing game of “what’s that film?” or “who’s that actor/director?” which Erickson offers throughout the book, there is also an abundance of movie references that became tiresome even for me, a fanatical movie freakster. When everyone Vikar encounters knows the difference between a Howard Hawks and a John Ford picture, or identifies themselves as a cineaste with the ability to pontificate for hours on the slightest minutiae of a Bunuel film, the book becomes the literary equivalent of a Tarantino movie. There is storytelling skill, fantastic dialogue and compelling action within, but there is also unfortunately a level of showing off that the author indulges in which strips the novel of its fun and magic.

Those criticisms aside, ZEROVILLE is overall a remarkable novel that attempts to blur the lines between how reality shapes the movies and how the movies shape reality itself. The ideas are potent, the characters are engaging, and the ending manages to be mysterious, inconclusive and completely satisfying all at the same time. A Fade Out worthy of Fellini or Godard’s best.
Posted by Justin McFarr at 12:23 AM No comments: